“…The way out is not to slash and burn, it’s to innovate.”
– Steve Jobs

This week we mourn the loss of one of the greatest innovators of our time.

In his lifetime, Jobs brought us new ways of experiencing technology life that we likely may not have thought of on our own. In fact, the Man Behind the Mac has been named on some 313 issued patents. That’s excluding any applications that may have failed to make the cut and whatever countless other innovations he may have influenced that were never patented.

Even more amazing is the variety of items he had his hands in designing over the years. Steve Job’s design patents cover everything from the iconic round mouse and the packing for the iPod to the glass stairs in Apple Store.

Here are just 5 of Job’s most interesting creations: 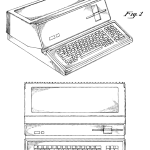 This is the Apple III, the first personal computer Steve Jobs ever received a patent for. Like most of Jobs’ patents, this is a design patent – protecting the look & layout of the machine but not the general mechanics & internal workings.

And, arguably, it is the design – the look, the intuitive ease of use, the distinct simplicity – that continues to set Apple products apart. 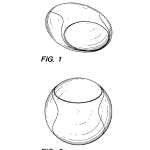 The Iconic (or Infamous, depending who you ask) Apple "Puck Mouse"

18 years to the day after he applied for the now-historic Apple III patent, Jobs submitted the patent application for the now-infamous Apple USB “hockey puck” Mouse. The design proved so unpopular, it was discontinued after less than two years on the market.

Patented or not, this is one product many users were happy to see go.

Admittedly, my own memories of multicolored moon-shaped mac mice are fond ones – if not a little awkward to hold onto.

3. Monitors from the Future 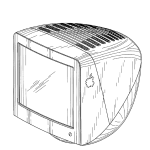 This 4th generation Mac monitor design proved much more popular than the "puck mouse" made to match.

This may look outdated, but at the time of application this design was as much on the cutting edge as many of the products Steve envisioned.The fourth generation of Macintosh displays debuted with the release of the Blue & White Power Macintosh G3 in 1999.

The rounded, bicolor design is the marker of all early 2000s Mac monitors & original iMacs – not unlike the above mentioned puck mouse, but much more happily received. 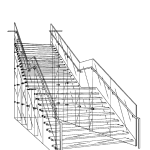 Jobs left no detail unnoticed when designing the staircase for Apple Stores.

Beyond the design patents which gave Apple exclusive right to the look of their products, Steve Jobs also patented features within the retail stores themselves – including the famous “glass staircase.”

What’s the value in creating amazing, stand-out products if you can’t display them just as uniquely? 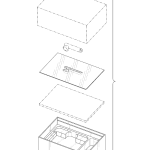 This iPod packaging is one of Apple's many patented packaging designs.

What good is a product without a package that protects, showcases, and sells the product as well as the product itself performs?

Jobs seemed to always be keen on this, with advertising & packaging that echoed the products themselves. This 2010 patent for an iPod & earbuds is only 1 in a long line of creative Apple packaging.

Patenting his designs may have allowed Jobs the competitive edge when bringing his products to market, but a legacy like this isn’t built on the exclusive right to market something.

A legacy like this is built on the fact that those products he designed have touched, enhanced, and even improved the lives of so many people.  They were marketable innovations. They were practical and relevant.

They embody everything our patent system was designed to encourage.

Yesterday I caught an AP article eulogizing Jobs as “a modern magician who reached into tomorrow and came up with things that changed millions of lives.”

Time traveler, medicine man, father, brother, mentor, and friend to many. Visionary to the world. Thank you, Steve Jobs, for bringing us together in ways we never could have imagined.

I wonder in a hundred years if we will look at his work the way we look at Edison’s today.