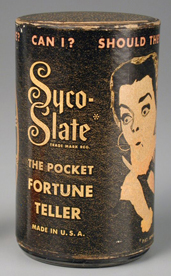 The Magic 8-Ball was inspired by fake seances. Mary Carter, a phony fortune teller, created a spirit writing device. Using a slate enclosed in a box, Carter could secretly write and pretend the spirits were communicating with the device. Her son, Alfred Carter, was amazed by the invention but wanted to make a device that required no skill to use.

Alfred Carter created a device he called the Syco-Seer in 1944. The device was a tube divided in half. Each half was filled with a dark liquid and had a die with answers printed on each side. Each end of the tube would reveal different answers when asked a question.

Carter showed his idea to a local merchant in Cincinnati. The merchant wanted to sell the Syco-Seer in his store and distribute the product. Carter asked Abe Bookman, a relative for help with the creation and distribution of the product. They formed Alabe Crafts to produce and market the product. The product name was changed to Syco-Slate: The Pocket Fortune-Teller. In order to generate interest, women dressed like gypsies demonstrated the invention in department stores. END_OF_DOCUMENT_TOKEN_TO_BE_REPLACED

END_OF_DOCUMENT_TOKEN_TO_BE_REPLACED

“…The way out is not to slash and burn, it’s to innovate.”
– Steve Jobs

This week we mourn the loss of one of the greatest innovators of our time.

In his lifetime, Jobs brought us new ways of experiencing technology life that we likely may not have thought of on our own. In fact, the Man Behind the Mac has been named on some 313 issued patents. That’s excluding any applications that may have failed to make the cut and whatever countless other innovations he may have influenced that were never patented.

Even more amazing is the variety of items he had his hands in designing over the years. Steve Job’s design patents cover everything from the iconic round mouse and the packing for the iPod to the glass stairs in Apple Store.

Here are just 5 of Job’s most interesting creations: END_OF_DOCUMENT_TOKEN_TO_BE_REPLACED 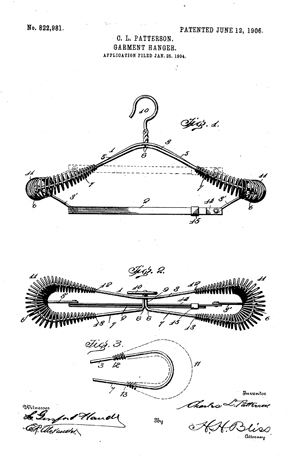 The coat hanger was invented in response to a lack of coat hooks in an office building in Jackson, Michigan in 1903. Albert J. Parkhouse worked for Timberlake Wire and Novelty Company which made lampshade frames and other wire items. One day, he arrived at work to discover that all the coat hooks were occupied. Parkhouse did not like having his winter coat getting wrinkled on the back of a chair all day. He decided to find a solution.

The company produced wire products so there was always wire laying around. Parkhouse grabbed a piece of this wire and twisted it into in two ovals with the end twisted together to form a hook. Another piece was twisted to fit inside the shoulder of his coat. The last piece curled in the center. His new wire creation allowed him to hang his jacket anywhere.

He continued to perfect his invention. Eventually all of the employees were using hangers created by Parkhouse. The company saw the potential of this idea and they applied for a patent for the invention. Because the hanger was created at work, Timberlake Wire and Novelty Company owned the rights to the product. END_OF_DOCUMENT_TOKEN_TO_BE_REPLACED 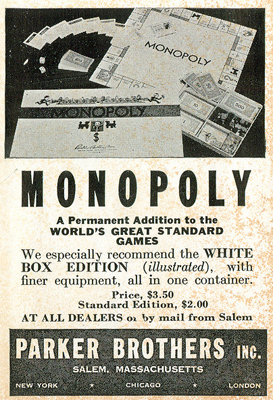 Charles Darrow, an unemployed man living in Germantown, Pennsylvania, created the board game Monopoly in the evenings while trying to make ends meet during the day. In the game, all players have the chance to buy and sell real estate. Living during the great depression, this board game gave the hard pressed workers of the time a chance for fantasy and distraction from their difficult lives.

Darrow showed his new board game to Parkers Brothers executives and they rejected the idea. They stated that the game had at least fifty-two design flaws including that the game was way too long, the rules were difficult to follow, and there was no real goal for the winner. With help from a friend who was a printer, Darrow went on to manufacture the game himself. He sold 5,000 copies to a local Philadelphia department store. The game was hit. Everyone loved it.

One of the copies of the game was bought by the daughter of the founder of Parker Brothers. She suggested that her father take another look at the game. Parker Brother decided to license the patent rights from Darrow. Very quickly, Monopoly was selling over 20,000 copies a week. It was the best selling game in 1935. Darrow went from working odd jobs to get by to a very rich man quickly with the success of his game. END_OF_DOCUMENT_TOKEN_TO_BE_REPLACED

Is it true Yankee Stadium was built with special cement Edison himself had invented?

END_OF_DOCUMENT_TOKEN_TO_BE_REPLACED

Dear Geek,
I stumbled onto patent #1120656 the other day, and it looks like the pushpin (thumbtack) we buy & use today. Do you know if this was the original pushpin? And could you, anyway, tell me if not which one was and how did they came up with the idea?
Thanks, Geek!
Sincerely,
Fabi

END_OF_DOCUMENT_TOKEN_TO_BE_REPLACED

I saw a motorized pogo stick on Auction Kings. What can you tell me about this crazy invention?

The owner of a tool and die shop in Elwood, Indiana, Gordon Spitzmesser, invented this pogo stick which was basically a small gasoline motor by combining the barrel of a grease gun with a lawnmower piston. Bouncing pushed the piston in the cylinder, compressing the file and firing a sparkplug which would cause the stick to launch into the air. The average bounce was about 30 inches high.

Chance Manufacturing, an amusement ride manufacturer, purchased the patent rights from Spitzmesser. Chance sold the invention in the 1960’s as the “Hop Rod.” Ultimately, the toy was banned after too many people were injured in accidents involving the hopping stick. Today, there are very few left in existence and I am certainly not rushing to try one out. 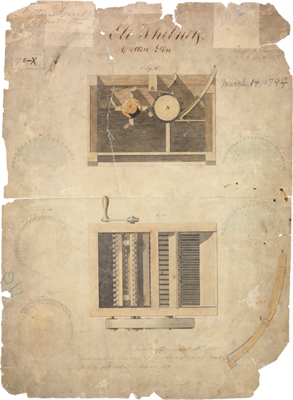 An invention can be so valuable as to be worthless to the inventor. Eli Whitney came to this conclusion because of the financial failure that was the cotton gin. Whitney gained fame and notoriety from his invention but did not gain the wealth he had anticipated.

The cotton gin is a mechanical device that removes seeds from cotton. Before the invention of the gin, seeds had to be removed by hand. The cotton gin was a wooden cylinder with wire teeth. The teeth grabbed the cotton fibers and pushed them through a grate. The seeds were too large to fit through the grate so they were pulled away from the fibers. Whitney’s cotton gin could clean about 55 pounds of cotton a day.

The invention of the cotton gin changed the cotton industry in the United States. Whitney gave a one-hour demonstration of his new invention and farmers were ecstatic. They could now plant green seed cotton and remove the seeds much quicker and effectively.

Whitney did receive a patent for his cotton gin on March 14, 1794. This patent would later be numbered as X72. Whitney and his partner, Phineas Miller, did not actually intend to sell their product. They were planning to charge farmers for the service of cleaning the cotton. Their large price, two-fifths of a farmers profit, paid in cotton was the beginning of their financial problems.

END_OF_DOCUMENT_TOKEN_TO_BE_REPLACED 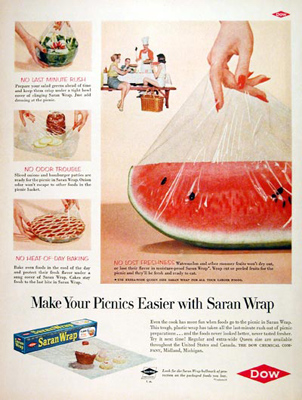 Saran wrap is another product which can be added to the list of accidental inventions. Ralph Wiley was not even working as a scientist when he discovered the substance that would become Saran wrap.

In 1933, Wiley was working in a laboratory at Dow Chemical cleaning glassware when he found polyvinylidene chloride, the chemical that would later become Saran Wrap. He came across the substance in a vial that he could not scrub clean. Wiley called this chemical “eonite” after a material in the Little Orphan Annie comic strip.

Researchers at Dow turned eonite into a greasy, dark green film. The product was not originally used to wrap food. The substance was used first by the military to protect fighter plants against salty sea spray and then carmakers used it for upholstery. It was not until Dow created a version without the smell and green color that it was used for food protection. END_OF_DOCUMENT_TOKEN_TO_BE_REPLACED