Inventors take heed and hear this:

“The smallest features of modern life are stealth inventions. Their ingenuity is quiet. Their advantages are imperceptible. But they are inventions.” – theatlantic.com

Therefore, if curiosity killed the cat and ‘how the straw bent’ sounds like the prelude to a problem, then a quick search can save the day.

Yes, the next time the kids (or anyone) sticks straws up their noses tempting anyone to wonder “who in the heck invented straws?” (not to mention why anyone would stick a straw up their nose) 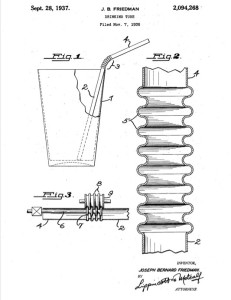 At least there’s this closure:

Meet Joseph Friedman, the man who made sipping simpler. (and probably never intended for his invention to wind up protruding from a nose)

Born October 9, 1900, Friedman would himself wind up with something: nine patents.

To his credit, the man had some great ideas, but, the one he was best known for turned an idea into a multi-million dollar business.

Armed with an education (optometry) and real estate skills, Friedman often moonlighted as an inventor: tinkering around with ideas to try and make things better.

Then one day and according to professorwalter.com : “while sitting in his brother’s fountain parlor in San Francisco, Friedman watched his young daughter Judith struggling to drink a milkshake,“

What happened next is what’s probably happened more than once and probably a billion times to an inventor.

What sets Friedman apart from the idea challenged is that he took the straw home and began tinkering with it. 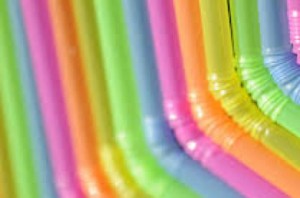 By inserting a screw, and using dental floss, he “impressed the grooves into the straw and handed it back” [to his daughter] and the world’s first bendable straw was created.

And, we all know, nothing does.

Friedman’s invention was no exception.

“Friedman had to fight to prove the urgency of his invention. In his legal claim to the U.S. Patent Office in 1936, he summed up the tweaker’s manifesto in a short paragraph that makes a fitting capstone to this brief history of the bendy straw:”

Applicant has met a problem long existing in the art. A view of any soda fountain on a hot day, with the glasses showing innumerable limp and broken straws drooping over the edges thereof, will immediately show that this problem has long existed. Where we have the conditions where certainly the straw is old, where corrugated tubing is old, and where no inventor, during those years, has seen fit or has been able to solve this problem, whereas applicant did, that situation alone is prima facie evidence of invention.