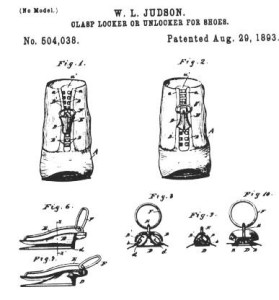 The zipper as we know it, evolved from the “clasp-locker” patented by Whitcomb L. Judson on August 29, 1893.

Judson was an inventor born in Chicago, Illinois on March 7, 1846. He was awarded 16 patents throughout his thirty year career with his most noteworthy invention being the chain lock fastener for shoes and other articles of importance such as clothing or mailbags.

One look though at Judson’s idea for the clasp-lock and the first thought that comes to mind might be “cumbersome” or more aptly and modernly put “a pain in the butt”.

A pre-curser to the zipper, Judson’s clasp was intended to be the “what’s for” when it came to walking (in a pair of shoes).

On his application for a patent, Judson wrote: 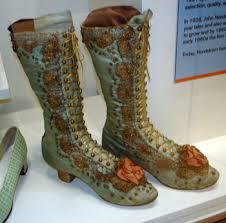 Search for “shoes from 1893” yielded these

“These clasps or fasteners, when in position on the flaps of a shoe or other adjacent parts which are to be united, may be engaged one at a time in succession, by bringing the two parts of the clasp into their proper angular relation to each other, by hand. But this is a tedious operation; and makes it difficult to draw the adjacent parts together, under the proper strain.”

While the zipper went on to become the fastener of choice, the clasp or chain-lock fastener continued to thrive where corsets were concerned to keep pin-up gals contained far into the future.

The corset of course, has a bad reputation. Said to cause constipation and indigestion among other health related issues and misshapen organs, it’s rumored that a doctor doing an autopsy on a body once bound by a corset who, after coming across a weird looking liver would automatically deduce “this was caused by a corset”. 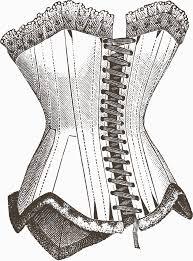 It’s doubtful though that Judson meant any harm to come from his invention but rather his intentions were good:

“The clasps may be easily and cheaply made of any suitable metal, and may be finished in any desired manner, so as to give an ornamental appearance,” Judson wrote.

It is clear Judson’s intentions for the clasps was mainly for shoes but, Judson is recognized as the inventor of the zipper too however, Judson’s metal zipper fastener was called the clasp locker and not referred to as a “zipper” until many years after his death on December 7, 1909.

According to Wikipedia, Judson’s first slide fastener patent was applied for in November 1891. At the time the United States Patent Office didn’t require a working model of a patent, only that the invention was to be a novel idea. However, his invention was almost rejected by the patent assistant examiner Thomas Hart Anderson because there were already several types of shoe fasteners already patented. He applied for a second patent on an improved version for the same item some nine months later before the first was even approved. 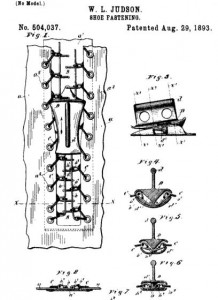 According to superbeefy.com the zipper got it’s name after Judson’s company got an order for 10,000 of the fasteners he invented.

After that, B.F. Goodrich started using the fasteners on rubber rain overshoes they called “zippers” and that, is the myth revealed about the clasp that became a zipper.

And that’s it about our zipper.

From mail-bags to belts to the uniting of seams, Holy Levi, how else could we fasten our pants so pleasantly?