In June 1914, the FC Taylor Fur Company of St. Louis Missouri patented a set-gun device and US Patent number 1,098,742 became the Taylor Fur Getter for sale to suppliers.

Meanwhile after a train wreck in Siberia in 1919, Lieutenant John Brandon, from St. Cloud Minnesota (now named Yevgeny Roskovski) was adjusting to his new life.

One cold and snowy day, he set out dressed completely in animal skins and furs on a trapping and hunting trip carrying his beloved .30-40 Krag. (wait, what? No Fur Getter?) 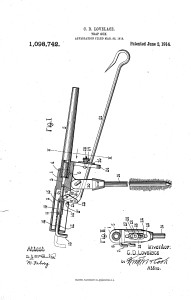 Lt. Brandon was on the run from the Russians, so it’s quite possible the American soldier wasn’t equipped with a Taylor Fur Getter because the set-gun wouldn’t have proven practical deep in the forest 300 kilometers northeast of Irkutsk.

The Fur Getter was however, making the rounds in the US with it’s simple operational concept of staking the firearm into the ground, adjusting the elevation for the height of the target animal and, with bait on the 11.5 inch trigger “that extended directly in front of the muzzle,” according to guns.com, and, all that was left to do was load it, cock it and remove the cotter pin safety device.

The instructions read: walk away, check daily or whenever you heard a gunshot. Reset as needed.

The concept was fairly simple –just not for a man stranded in Siberia whose status (as an American soldier) would get him quickly executed if discovered.

Guns.com also explained hunting with the Taylor Fur Getter was “Clean, methodical, and reliable with almost a guarantee of quick harvesting of an animal with a small caliber head shot, which preserved the pelt. The wood screw of the mounting steak allowed the device to be placed vertical on the trunk of a tree to target raccoons, or along crawlways and hen house exits for foxes, etc. The barrel was removed by turning the handle of the retaining pin for loading and unloading. Its small .22 caliber 6-inch barrel was rifled even though every shot made with it would most likely be at point blank range.”

Unfortunately, the nifty (and inexpensive) devices which sold for $3-$4 in catalogs, soon became illegal under the terms of the Federal Firearms act of 1934.

Not good news for anyone who’d grown fond of relying on Taylor Fur Getter for hunting and trapping expeditions.

There is however, good news for fans of Barry Kelly: he’s the author of three more books following the Brandon family that are chock full of action packed espionage adventures and, Run to Freedom is the prequel to The Brandon Novels.

And, while no one knows for certain what really happened to Lt. Johnny Brandon, chances are there could be another novel coming that finds Brandon setting up camp and using the simple yet efficient Taylor Fur Getter.

No matter if the next book is or isn’t set in a time before 1934 and Firearms acts, Kelly writes in such a way that makes you believe anything is possible while leaving you longing for more. – factsandfictions.com 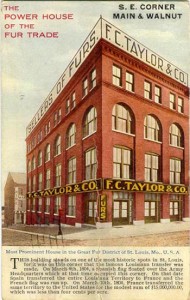 Luckily too for Kelly or anyone else who might have a hankering to get their hands on the 100 year old Fur Getter, “a decent number survive due to their sturdy and simple construction and extensive use of rust-resistant brass materials. Functional examples typically sell for $1500-1900 and even non-working specimens that are still otherwise complete often bring as much as $800-1000 from collectors.” Said Guns.com.

Google it and you just might find a few.

But remember, “Current BATFE rules that because of the date of their manufacture, value, design and other characteristics, the following firearms are primarily collector’s items and are not likely to be used as weapons and, therefore, are excluded from the provisions of the National Firearms Act, listing them as curios and relics. That keeps the Fur Getter and its larger cousin the Sure Shot from continuing to fall under the short-barreled weapon criteria and dangerous device auspices of the Federal Firearms Act of 1934,” according to Guns.com, it was also mentioned it might not be a good idea to do anything but collect Taylor Fur Getters.

If you’re wondering why, it’s because the Fur Getter with it’s cousin, The Sure Shot (which was a larger version that fired a .38 caliber round from a smoothbore barrel) both have confirmed collector status from the Federal Government, but, putting the vintage set guns back into use would likely find you in bad favor with the feds.

Unless of course, your last name is Brandon, you’re now running from the KGB and former CIA agent David Barry Kelly has anything to say about it.

“When the time comes, the way will be clear.”
– Barry Kelly