Joshua L. Cowen was the original owner of the American Eveready Battery Company and designed a safety fuse to ignite photographic flash powder. This was the precursor to the modern flash bulb. However, the invention did not see much success as Cowen had hoped for photographers. The U.S. Navy bought the fuses and used them with underwater explosives.

Later, Cowen came up with the idea of decorative lighting for a flower pot. This light up device was composed of a metal tube, light bulb and ran on a dry cell battery. This garden decoration was also a failure.

In 1896, Cowen sold his company, ideas and patents to Conrad Hubert to become a full-time inventor. Cowen went on to pursue his passion for trains and created toys and a new company; Lionel Model Trains.

Hubert was a Russian immigrant who moved to the United States in 1891. In Russia, Hubert had a reputation as a great businessman. However, because of the Russian persecution of Jews, Hubert chose to move to the United States and arrived at Ellis Island in 1891. He changed his name to Conrad Hubert from his birth name, Akiba Horowitz. Exercising his business skills, Hubert opened a cigar shop in New York City. He also tried working within several other businesses including; restaurant, a boarding house, a milk wagon route, a jewelry store, a farm and a novelty shop. The novelty shop would become Hubert’s most successful business.

Hubert became aware of the potential novelty items had in the electric industry. After purchasing the company from Cowen, Hubert renamed it American Electrical Novelty & Manufacturing Company.

Hubert employed fellow inventor, David Misell in his company to help adapt his newly acquired ideas and patents from Cowen. Misell had patented a portable electronic lamp in 1895 and a early bicycle head lamp in 1896. Hubert and Misell took Cowen’s light up pot idea and altered it into the first flashlight. The first flashlights, in 1898, were handmade from crude paper and fiber tubes, with a bulb and a rough brass refractor. Many called it an electric hand torch. Misell patented several of his flashlights and they were granted to Hubert’s company. He was granted US patent 617,592 on January 10, 1899 for an “electrical device.” The first practical and modern prototype of a flashlight had been invented. Later, Hubert received US patent 737,107 on August 25, 1903 for an “electric-circuit closer.” 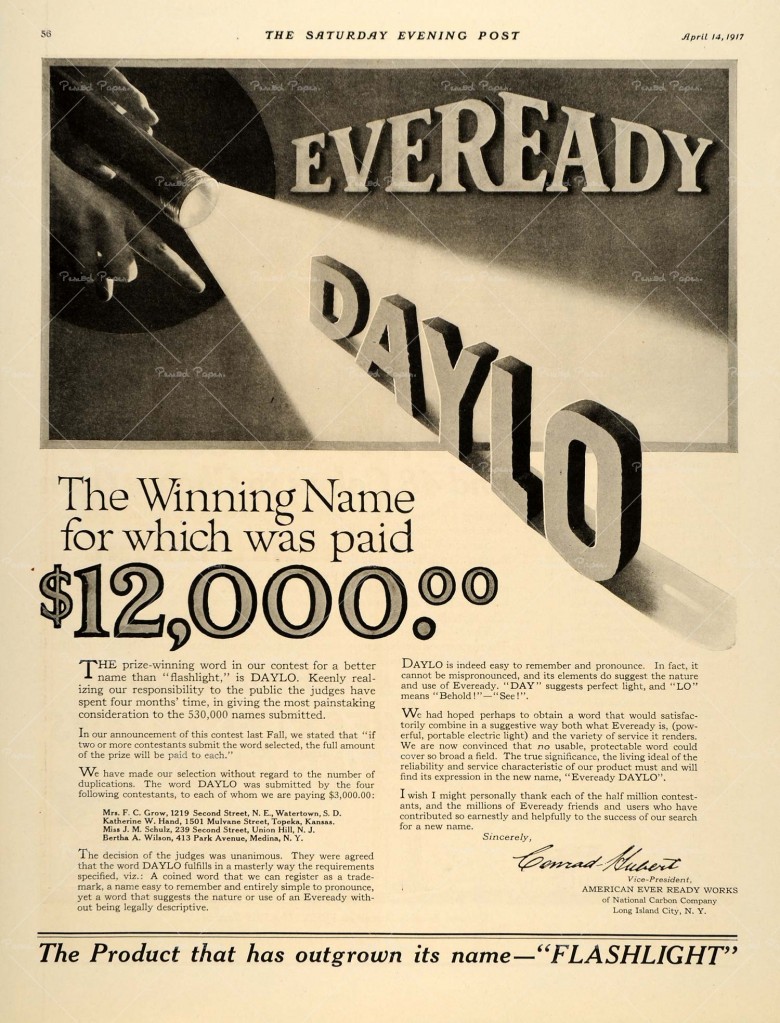 Misell and Cowen assembled some flashlights and gave them to New York City policemen to gain recognition for the invention. The testimonials created a great marketing strategy and the flashlight became a “must have” item. In 1899, a year after the invention of the flashlight, the biblical quote of “Let There Be Light” was used on the cover of the Eveready catalog to continue advertising the flashlight.

In 1917, National Carbon Company held a contest in search of a clever name for the flashlight. There were over 530,000 entries and four contestants received $3,000 each for the acronym “DAYLO.” This name would be easy to remember and hard to mispronounce. The name suggested the use of flashlights; “day”, suggesting perfect light, and “lo” meaning “behold!” or “see.” This acronym never stuck with the product and was discontinued after 1922.

According to an Eveready brochure, which came with the torches, “101 Uses For An Eveready,” said by 1916 the flashlight was an essential personal item – “ the light that does not flicker in a draught, extinguish in the wind, and is controlled instantly by finger pressure. It’s the light everyone needs.” Suggestions on how to use the flashlight within the pamphlet included; reading fruit labels, filling the tank of a gasoline stove, examining a refrigerator’s interior and signaling with Morse code.