Question from Steph:
Seasons Greetings, Geek!
I was wondering: does the Hershey’s Kiss design have a patent on it? It’s such an iconic little piece of candy, I thought it probably should. But, I couldn’t find anything about it myself.
I figured you could help!
Thanks
– Steph

Actually, there are no patents on Hershey’s Kisses although they have received three different trademarks over a 76-year period.

First, that unmistakable paper plume waving from the top of each kiss was trademarked in 1924 – three years after a machine for automated wrapping and insertion of the slip of paper was introduced.

Then, in 1976, the foil wrapper for the kiss was trademarked.

Surprisingly, the word “Kiss” itself was not trademarked until 2001 – finally awarding Hershey exclusive rights to calling a chocolate drop a “kiss.” This is because back in 1907, when the chocolate treat was introduced, many companies offered candy kisses. Generic flavored kisses included Cocoanut Kisses, Molasses Kisses and Nut Kisses which could be made by anyone. Commercially produced kisses available at the time included Moonlight Kisses, Elfin Kisses, and Heckerman’s Lucky Kisses – along with Hershey’s variety, of course.

With the name ‘kiss’ as synonymous with practically any bite size candy, Hershey was unable to trademark the term for years because it was viewed as too generic. It was only in 2001 that Hershey’s lawyers won a long court battle based on the fact that by this time any candy called a kiss referred to Hershey’s Kisses. The United States Patent and Trademark office issued Trademark Registration Number 2416701 to the Hershey Company on January 2, 2001.
You can view the trademark here.

Thank you for the excellent question, Phil.

“Wire-Nut” is actually a registered trademark of Ideal Industries. Ideal Industries patented their plastic connector on January 22, 1963. They received patent 3,075,028 for a connector assembly. Their patent was for a cap connector made of a thermoplasitc. You can view the patent here.

Today though, when one refers to a Wire-Nut, they are referring to the something similar to the product introduced by Ideal Industries in the 1960’s 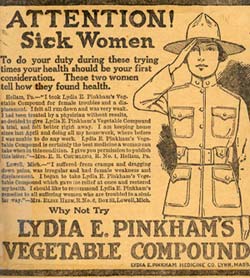 Patent Medicine is a term used to refer to concoctions popular in the 18th and 19th century which were advertised to cure almost every disease. Patent Medicine is actually an incorrect name though. Most of these products were trademarked but never patented. The process of patenting a product requires full disclosure of a medicine’s ingredients. Most manufacturers did not want to reveal the toxic or questionable ingredients of their so-called cures.

Patent Medicines were mostly very similar in their preparation containing various vegetable extracts, generous amounts of alcohol and often narcotic such as morphine, opium, or cocaine. These drug compounds could be deadly and were often more hazardous then helpful. At the time, there were no regulations in regards to the ingredients of these medicines. Claims made by manufactures of Patent Medicines included the ability to cure everything from caner to tuberculosis to paralysis. END_OF_DOCUMENT_TOKEN_TO_BE_REPLACED

In 1928, the Fremont Canning Company was looking for a face to represent its new baby food campaign. Owner Frank Gerber decided to sponsor a nationwide competition to find the face that would appear on the new packaging. Paintings and drawings were submitted from all over the country. The entries included everything from intricate oil paintings to simple sketches.

Dorothy Hope Smith’s unfinished charcoal sketch was among the entries. She had offered to finish the sketch if it was chosen. The judges fell in love with the five month old Ann Turner in her submission. The drawing of her tousled hair, bright eyes and round lips was the winner. The judges did not even want Smith to finish the drawing. Smith received three hundred dollars in prize money. END_OF_DOCUMENT_TOKEN_TO_BE_REPLACED 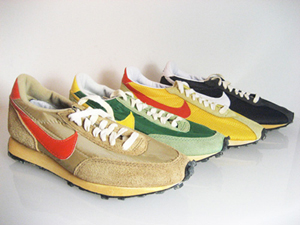 In 1971, Carolyn Davidson was studying graphic design at Portland State University. Phil Knight, the co-founder of Nike, was teaching accounting classes at the school while starting his business then known as Blue Ribbon Sports. Davidson began doing freelance work for Knight’s small company.

Knight approached her to design a logo that could be used on the side of shoes. He wanted something that suggested movement. In June 1971, Davidson presented a number of options to Knight and other executives at Blue Ribbon Sports. The company had a presentation quickly approaching and shoeboxes waiting to be printed so they had to have a logo promptly. The group selected the logo now known as the Swoosh. Knight told Davidson at the time “I don’t love it but it will grow on me”. END_OF_DOCUMENT_TOKEN_TO_BE_REPLACED

Would you believe the world’s best known brand got its name from a bookkeeper?

Frank M. Robinson, an accountant and partner in what would come to be an iconic soft drink, not only suggested the name Coca Cola; he designed the logo, too. The name was derived from the two main ingredients in the product: cocaine and caffeine. The cocaine came from the coca leaf and the caffeine from kola nut, leading to the name Coca-Cola. The K in kola was turned to a C for marketing purposes. END_OF_DOCUMENT_TOKEN_TO_BE_REPLACED